The Kano State Private Health Institution Management Agency under the state’s Ministry of Health in a joint operation with the Nigerian Medical Association, have arrested an alleged fake medical doctor identified as Ibrahim Adamu.

According to a Report,  Ibrahim Adamu was arrested while posing as a doctor at a hospital in the Kano state.  adding that the fake medical doctor have been practicing in the state for years.

The PHIMA Secretary, Usman Tijjani Aliyu said they had been trailing the suspect for a long time.

Usman Tijani disclosed that the fake medical doctor was arrested following a tip-off when he was going from one hospital to another in the state as well as neighboring states.

The PHIMA Secretary also stated that the suspected is in police custody for further investigation.

Meanwhile, the fake medical doctor had confessed that he was working with someone else’s document, which he stole from the owner. 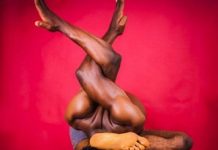 Demand for Fitness Trainers in Nigeria Increase Due to Covid19

Bobrisky – Tonto Dikeh Has Been My Bestie for Over 5 Years