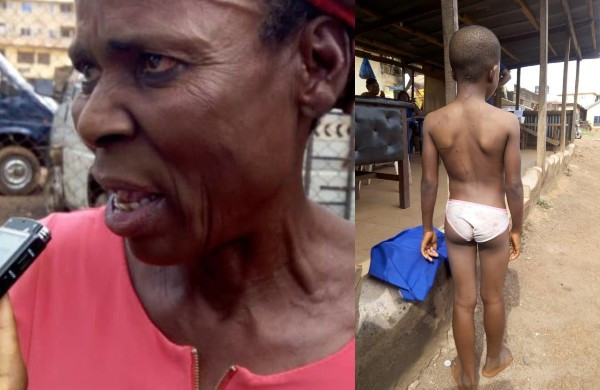 A 75-year-old grandmother has been arrested by the Ebonyi State Police Command, for flogging and pouring pepper into the eyes and private part of her 11-year-old house help.

The victim whose body was covered with scars from previous abuses has been living with the elderly woman since her father who has an eye impairment cannot take care of her and her four siblings. It was further gathered that the abuse victim’s mother is late.

Recounting her ordeal, the 11-year-old house help said she was recently abused because she took the old woman’s juice and biscuit.

“My Madam usually invites outsiders to flog me whenever I offend her. She also pours grinded pepper into my private part and eyes. This one she did to me now was because I was hungry and I took her biscuit and juice to eat”

The 75-year-old woman however said she sought for permission from the girl’s aunt before pouring pepper into her eyes and genitals.

“Although I regret my actions, I sought the permission of the girl’s auntie before I poured pepper into her private part and eyes.”

According to the police report “The child had been treated and reunited with her family members. The suspect will be arraigned after the fight against COVID-19, is over”

CoronaVirus: Nigerian Tests Negative To Coronavirus After Contact With Italian

Tips to keep your relationship strong and healthy

Coronavirus: No insurance cover for most virus-hit businesses