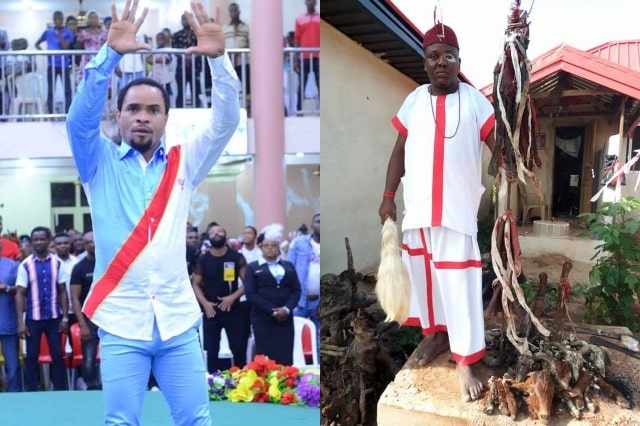 GoldenNewsNg reports that the problem between Prophet Odumeje who is the Spiritual Director of Mountain of Holy Ghost Intervention Deliverance Ministry World Miracle Center, alias Land of Freedom and Pericoma’s son ( Arondizuogu native doctor) is about to be settled as a very popular native doctor and the son of late Pericoma is set to engage the controversial Anambra Prophet ( Prophet Odumeje)

This reliable online news platform had reported earlier that Prophet Chukwuma Odumeje was challenged to a spiritual battle by a popular native doctor and the son of late Pericoma, Omor Perry last week after the controversial Anambra prophet insulted Pericoma and the people of Arondizuogu.

Displeased with Odumeje’s insult, a native doctor of Arondizuogu, Imo state, southeast Nigeria and some elders in the village have gathered to perform a ritual to curse controversial Anambra prophet for allegedly speaking against the late herbalist Pericoma and the people of Arondizuogu.

According to a video sighted by GoldenNewsNg , Villagers and elders can be seen sitting at the big shrine while the native doctor performs rituals against Prophet Odumeje using their native language.

The native Doctor called on all their gods to come out and fight prophet Odumeje also known as “The Lion, Indaboski and Liquid Metal” for condemning it. The native doctor killed a life fowl which he said it represents Odumeje while breaking the fowl’s legs, he cursed Prophet Odumeje and his Family.

Furthermore, the Arondizuogu native doctor accused prophet Odumeje of getting his power from India, adding that he cannot get his power from a foreign land and test in their Own Land. The native doctor then went further to slaughter a fowl which he claimed had been invoked with the spirit of the prophet. 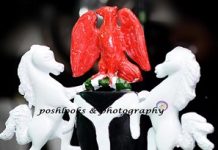 PDP Tackles Buhari Over Signing Of Bill In UK

BREAKING: FG restricts travellers from US, UK, 11 others over COVID-19